I suppose I had better explain myself…

I first came across the ‘thirsty fish’ reading Jan Willem de Wetering’s book “The Empty Mirror”.  It was the second book I had read about westerners’ experiences in Zen Monasteries. I was about 17 at the time.  In the book, the author learns that the Head Monk was once a wealthy young man, who would visit the Zen master (Roshi) to complain about how unfair the world was, and ask why one should take part in anything since it all was just suffering.  To be fair, the young man had lost both parents in a car accident.  Furious at the world, he raged at the old ‘Roshi’ and demanded to know why we must suffer.

The old man replied “I can’t give you the answer.  You already know the answer, you can tell me if you like”.  In reply the young man demanded to know why he should become a monk when he was rich. He could have a very comfortable life, with a wife, vacations and all the trappings instead. The old monk replied “Well, don’t then. I never told you to become a monk. But if all you want to do is complain, stop coming here. I don’t have time for it”.

The young man sobered somewhat and asked “If I become a monk, would you make time  for me then?”.  “I suppose I’ll have to”, said the old man.  “But you are like a fish complaining it is thirsty”.

I’ve been thinking about that (for just over 30 years). How can you not know you know something? How can you be blind to what you have? Years later, studying psychology, I learned that beliefs and attitudes can very well determine what you see, or not.

Much of my work involves meeting peoples’ resistance to change.  ‘I want to feel better, but I can’t do anything’. ‘If only my boss would (insert demand here)’, ‘if my partner would just (insert demand here)’, ‘when someone does (insert demand here) for me I’ll do x, y and z!’  If people want to eat better they assume they lack the right cookbook, or need to watch Pete Evans ‘activate’ his paleo-almonds. We can’t possibly get fit until we have active wear and a gym membership right?  There’s no way we can spend more time on our relationships until we ‘get’ time; but the hours in a day are not negotiable, only our choices about how we use them.  I can’t improve my craft because I don’t have the best teacher. We have no choice.

“I can’t because I don’t have” – is the default position.

How did we end up with this mindset? I believe we’re fed this ‘default’ position from the cradle to the grave, because it’s easy to sell a thirsty fish what they already have. After all, if you know yogurt pots make great seedling containers, I can’t sell you pots!  If you can see those old bunk beds could be turned into a hen house, I can’t sell you a shed.  If you can set your own standards for your practise, your life and your health, perhaps I’ll never convince you that you need a ‘guru’/’star instructor’/’life coach’ etc. (Click here for a sensible word on self – care).

Thirsty fish are good for business, and they’re always in your ear, or on your phone, or TV.

“Look at who you could be, what you could have and how happy you would be if only you had (insert product for sale – at a bargain price – here)! We know you don’t have it yet because you’re not happy, and if you bought our product you would be!”

I myself am a bit of a master of the thirsty fish statement. I’m also rather skilled at making them sound very positive too. So – here we go, I’ve put it off too long already. The embarrassing bit.

At a karate retreat (called a gasshuku) earlier this year, we did an exercise called ‘ude tanren’. This exercise is done with a partner and involves toughening one’s forearms against repeated strikes/bumps. I had done it before, but not at this level! It is not especially pleasant but an important part of our training. One can practise without a partner, on an Okinawan tool called an ‘ude kitae’; a wooden post wrapped in rope you can strike and kick, learning how much you can take and habituating to the discomfort inevitably produced.

At the end of the day I said (with endearing enthusiasm no doubt), “I’m going home to build an ude kitae sensei!”.  I sounded really serious, positive and committed didn’t I!?  I can’t practise ude tanren yet, but as soon as I get ….. He just smiled.  He has seen my dojo.  Have a look at the picture above, far right (go on, I’ll wait for you).

For those who don’t train, that wooden contraption on the right is a ‘Muk Tan Jong’. Essentially it’s a Chinese ‘ude kitae’.  Sure they have a few differences. If anything the Muk (or Mook) Tan Jong is fancier.   There was not a thing stopping me from doing most exercises on the (expensive) gear I already owned.  Right now. Without building or buying anything.  It was a week or two before that dawned on me, (to my embarrassment) although I am in the dojo most days. I was blinded by the thirsty fish, and not for the first time. I have little doubt my sensei could see the thirsty fish flapping about in front of him, but he didn’t mention it. How do you explain water to a fish?

The ‘Thirsty Fish’ is good for business, and it is a great source of paralysis.  While we can tell ourselves we can’t do anything right now, we don’t have to do anything right now. Well, nothing except buy some lycra, or a cookbook, watch a documentary or something else that will give us the pale chimera of progress. But we don’t have to face anything difficult or be honest with ourself. 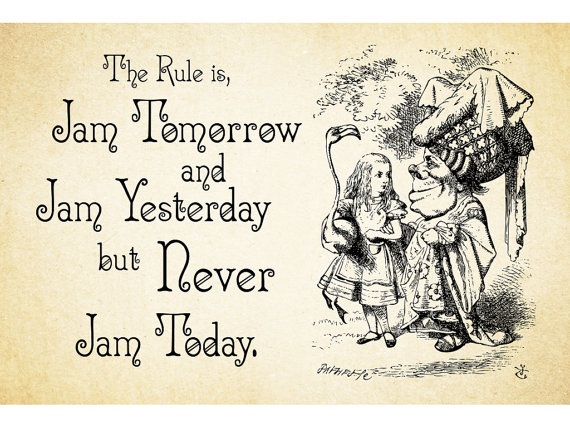 But now is all there is. Later never arrives. Lewis Carroll put the problem perfectly; ‘Jam tomorrow, Jam yesterday, but NEVER Jam today!’. If you haven’t read ‘Alice in Wonderland’, stop reading this nonsense, go to your library and read it now. But I digress.  If the thirsty fish gets us off the hook (sorry – couldn’t resist that one), so we do nothing about moving in the direction we want to move now, we’re high and dry for all time. Dr Suess described the ‘most useless’ place the thirsty fish leaves us…. the waiting place:

Waiting for a train to go,
or a bus to come, or the rain to go
or the phone to ring, or the snow to snow
or waiting around for a yes or no,
or waiting for their hair to grow (was he talking to ME then??)
Everyone is just waiting…

Waiting for the fish to bite
or waiting for wind to fly a kite
or waiting around for Friday night,
or waiting, perhaps, for their Uncle Jake,
or a pot to boil or a better break
or a string of pearls, or a pair of pants
or a wig with curls or another chance.
Everyone is just waiting.

What if we turned the thirsty fish on its head in any given situation? Turned it all around so instead of hoping for a greater teacher, we turned our mind to being a better student? Instead of wishing for a better behaved child, I turned my attention to being a better behaved parent? Instead of wishing my wife was more supportive, what would happen if I determined to be a more supportive (or communicative) husband? Instead of bemoaning the lack of opportunity to sleep in, we went to bed early? Surely it’s worth trying.

If we start with the assumption that we already have everything we need to make positive changes in our lives, we can start now.  I don’t have to wait for anyone, I can take my power back, and move – even a little – in the direction I want my life to go. Sure, our assumption may not be 100% correct, we might need some help or a small piece of white oak.  The ‘Thirsty Fish’ assumption is never 100% correct either, yet we seem content to go with it all too often.

This may sound a little judgemental, but it isn’t. When I accept my situation is under my control at least to some degree, I become equally free to accept it isn’t changing because I don’t wish to do what is required. It’s my life – who is anyone to say different? But at least I am free of resentment, or despair.

Here’s my favourite example. About 15 years ago I conducted and published a study on a parenting program for parents of children who had various disabilities. One group took part in the program (about 15 families) and one group were ‘business as usual’. A range of measures were taken before and after the program; behavioural observations, questionnaires about the children’s behaviours, and how much parents were upset by them, and also the marital conflict that came along with it. Parents learned about ways of positively changing children’s behaviours in a gentle but assertive fashion.

The results were interesting. After the program (about 8 weeks), the challenging behaviours did improve a little.  But the real change was seen in parental confidence they could manage the behaviours. Parents were much less distressed by the behaviours even when objectively, they didn’t change! In addition, parents fought about the behaviour a lot less.  The emotional change in the parents seemed far too large to be explained by relatively small changes in behaviour. So what was that all about?

There’s the magic in standing up to the thirsty fish right there. If we assume that we could change our lives for the better today, even in the smallest of ways, using what we have, we might find that we’re not so deficient after all.

Maybe, just maybe, there’s not so much to be done. Nothing that really needs fixing so terribly. We might even discover we’re alright as we are. Complete even, which by the way, come from the Latin root word ‘perfectus‘. Perfect. 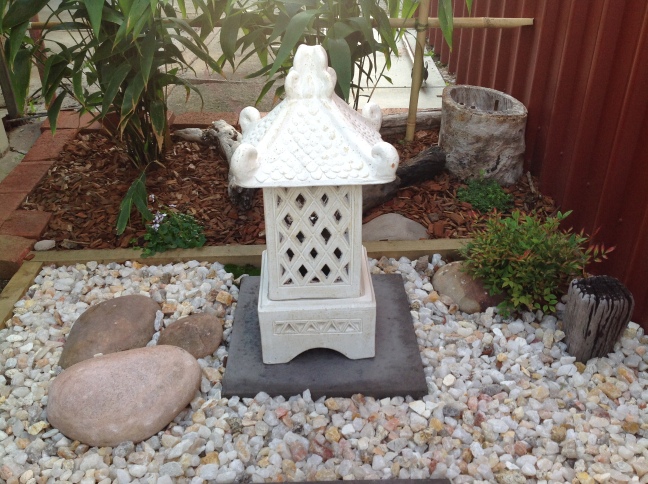 Perhaps the thirsty fish is blinding us to the completeness of our days, our families, and ourselves. Even if we do really need to change something, we can start now, with what we have. What more can we need?

By the way, that wooden dummy works just fine. Judging by the bumps and lumps on my arms tonight!

One thought on “Of Thirsty Fish…”