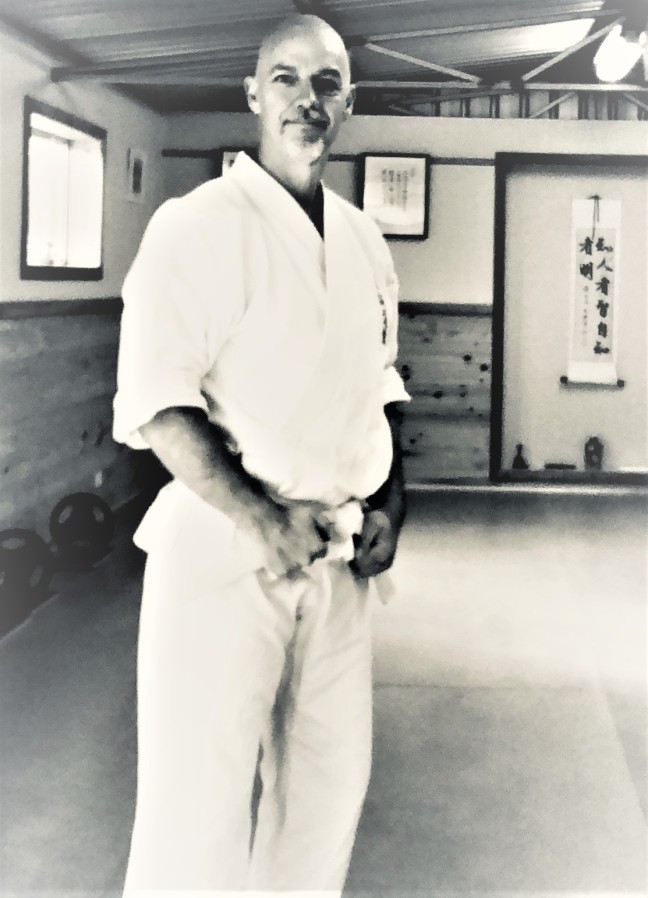 Altogether, I have to date spent about 12 years of my life studying one ‘form’ or ‘incarnation’ of karate or another. I have also dabbled in a few other arts, but it’s mostly karate. What was a I looking for when, at 17 years of age in 1987, I wandered into a zen-do-kai club in South Australia? Like a fish complaining of thirst, I was looking outside of me for what was within I suspect.

True enough, just before I turned 16, drunk and stumbling out of a nightclub I should never have been in to begin with, I was jumped from behind and treated to a head full of broken bones.  Coming out of hospital two weeks later, lucky to be alive but with a less symmetrical facial appearance, I confess to some interest in preventing a repeat experience.  When asked, I tell people that’s why I started training.

But there’s more to it. Over the preceding couple of years I’d learned how to fight. I wasn’t that good at it but I knew how to hit, head butt and kick, and knew that taking the initiative with all the rage you could muster would give you a reasonable chance of getting away. Getting jumped from behind, well that was another story; I got hurt by my own poor judgement and I doubt anything I’d learned up to that point would have helped much.

But no hiding I ever took hurt as much as my own mind. I was a sad, avaricious young man who was concerned mostly with pleasurable experiences as a means to find ‘happiness’.  My new facial features didn’t do much to improve my outlook, but sometime between then and entering a karate ‘class’ for the first time, I found myself in a bookshop.  A book called Zen Diary caught my eye. To this day I am not sure why I bought it – and with my spare education at the time it was a hard read (it still is – it is not a well written book). But for the first time, I encountered the idea that the way I was thinking about the problem could be my problem. That I was generating my suffering by being attached to things I had set a certain (and in many cases, arbitrary) value on was a revelation. I was intrigued, and to be honest; excited. I wanted to learn more.

After attending a few buddhist retreats at ‘Buddha House’ in Adelaide, I’d heard people talk a lot about zen, I talked a lot about zen. I’d tried sitting in Zazen with limited progress.  At the time I didn’t appreciate how relying on words can obscure self-understanding and reinforce self-delusion, but somewhere I must have had an inkling.  I think that was what lead me to karate.  Somehow I knew that what I was looking for had to be experienced through a confrontation with places in myself I didn’t care to look at.   I didn’t know it at the time, or couldn’t articulate it, but I was searching for a way out of my existential emptiness, not happiness as we popularly think of it. But my search was doomed at that time – because I thought that a guru, someone who had the answer that I could give responsibility for my progress to, was what I was after.  And I thought what I was after was ‘an answer’.  I found none of these.

My first instructor was a good technician who could fight – and liked to.  The training was physically hard, gloves were unheard of and blood-letting all too common!  Unfortunately, while he was a good fighter, he was not a budoka in any sense of the word.  When one night his drunken recklessness resulted in the  injury of one of his students, I remember a fellow student and I experiencing crushing disappointment in our ‘Sensei’.  I mean, after all, he was supposed to teach us how to become (at the same time) dangerous and wise, set an example and be a paragon of martial virtue!  The guru had failed to live up to the expectations of his groupies – because that’s what we were. How could he do this to us!? In truth, it wasn’t his fault he couldn’t live up to the pedestal we’d put him on. However much he liked the position, or we liked having him up there, the only way for him from there was down.  But I couldn’t see that at the time.

I was about 20 or 21 at the time, and disillusioned with my first four years in karate, I stopped training and wouldn’t return to it for about 18 years. My karate stopped, but my search for ‘answers’ didn’t.  A little progress was made along the way.  My love of singing and music made me a few dollars and a few friends along the way. Not much contentment but at least in the company of great songwriters (and drunks) one can self-indulgently celebrate the discontent that so often seems to fuel creative endeavor.

Time spent with a pack on, rock-climbing and wandering the deep back-country in Kakadu and Central Australia, looking for Bilbies with the Warlpiri people in the Tanami Desert, tramping the wilds of Tasmania and the Patagonian Andes, Sakura (blossom time) in Kyoto and Kurama-yama, and sunrise over Macchu Picchu gave me a sense of awe that has never left me; the memories alone give me joy and a sense of gratitude.  A degree and PhD in Psychology and Moral/Religious thought taught me that if you must ask questions, you’d better make sure they can be answered at all.  Better questions lead to better answers, but they still simply lead to more questions.  I made a decent living teaching hungry young minds how to ask quantifiable questions about human behaviour, but contentment wasn’t there either.

By far the greatest adventure was meeting my wife, a far better person than I in about every way I can imagine, and sharing with her the adventure of two wonderful sons. It is not for me to wonder what I did to deserve such good fortune, only to apply myself to becoming worthy of it. Of course, a young family joyfully put paid to my wandering about, and we put down roots here.  So here I was, a much happier (and balder) man, settled down and considering embarking on the study of karate-do once again.

It wasn’t long before I took up with a local karate organisation and soon found myself training at the club four nights a week and training at home or with friends two more. Fours years later, I was standing in front of 33 excited kids, and they were calling me Sensei! I had a black belt on and I’ll be damned if I hadn’t achieved something in Karate after all. Who could ask for more? Well, me. Some people are never satisfied. After a further four or five years, I was wondering what all this was leading to.

There was nothing wrong with the group I was with of course. It was populated by sincere modern karate practitioners who were good to me and I made very good friends among them.  The mix of kyogi (sport), kenko (health), and aspirations to budo was similar in most respects to just about any other group I have had contact with (although my experience there is not especially wide). But I kept coming back to my original reasons for walking into a dojo. Spoiler: It wasn’t for trophies.

Over time, I had the feeling that I was chasing two (three?) rabbits and catching neither – and in my late 40’s I’m not exactly loaded with time to study an endless way (never mind two!).  About this time, I decided to commit to one path – budo.  I had met a Sensei who was willing to help me find my way without taking responsibility for it.  A great opportunity.  But what is valuable will cost, and some difficult decisions had to be made. A lifetime of acquiring titles, cool stories and qualifications, all hung on the wall in a kind of ‘You deserve to be here’ Hall of Fame, makes for a difficult habit to break – and the pursuit of budo karate first called on me to cut the rope and do just the opposite.  Let go of that which you are afraid to lose.

After changing my mind about one hundred times in 48 hours, I woke one morning resolved to my decision. I met with my Head Instructor, and explained my decision to close the karate club, and leave the group to study elsewhere. I was gratified by his understanding and support. So there it was. One minute I was a ‘yudansha’ and a ‘sensei’. The next minute I was ‘nothing’, a white belt – beginning again.

It seems to me I began looking for answers, then a long time looking for better questions, and now I’m finding that the questions must be dissolved.

Why am I telling you – whoever you are – all this?  Well, I have in the past had some people hear about my wanderings, and I have often been asked ‘Why didn’t you record this? Write it down? Keep a diary?’  Well, I could be wrong, but I strongly suspect that everything I think IS wrong, and that with karate (among other things) I am about to start over in ways I can’t even imagine.  I have yet to practise formally as a student in my new situation, but the little exposure I have had (two short sessions and a few conversations) has prompted changes in my thinking such that it is hard to recognise how I was thinking about karate, life and practise only a month ago. For example, a month ago I would have suggested that I could start my practise in budo karate, and continue to teach the karate I was involved with.  Now, it is clear to me that is a patently absurd idea. It would produce a poor student, an appalling teacher, and a pretty rubbish husband and father to boot. One rabbit, one chase. Balance, or no budo.  But more about that later…

So I’d like to record my reflections so I can feel suitably embarrassed reading them later on. It is I guess a bit of a self-indulgent project, trying to create a karate/budo version of Zen Diary, but I hope it might prove mildly entertaining if not useful to some others.

To be clear, I’ll be writing more about budo karate as a means to personal development and introspection rather than karate per se. There are far more accomplished karateka out there, far better able to do that than I.  Nor will I be writing about my sensei, this is not only out of respect for his privacy, but because this blog is all about finding a way to be a better student of karate, and taking responsibility for one’s own life, progress and karate practise.  It’s my responsibility to find my way in this, and I am lucky to have a guide, but making this all about the teacher is (I think) to repeat earlier dead ends. Going around and around doing the same things and thinking the same way is like buying more cats hoping they’ll add up to a tiger.

I have no idea what’s going to happen, except that I will do my best, and I’ll keep at it. While you won’t have the experiences I’m having (you’ll be having your own) you’re welcome to read along!

Thanks for stopping by. 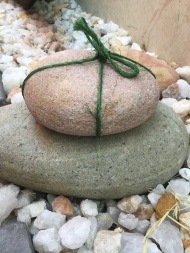